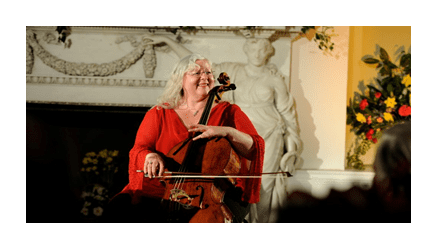 Music has often been used within the care of those with dementia, whether it’s Classical, Motown or Rock & Roll, music has the ability to stimulate the brain and, on occasions, bring back long-forgotten memories. At Stanfield we welcome cello artist Corinne Frost to play to our residents for their enjoyment, but also to help with their care.

Corinne is a very experienced cellist, she studied music at the Royal Academy of Music and went on to play in the Philharmonia Orchestra. In 1993 she came to Worcestershire as co-principal cellist of the English Symphony Orchestra and English String Orchestra.

Corinne also performs regularly with pianist Janine Smith and is also in a duo with Stephen Warner (double bass/classical guitar) called ‘Downside Up’.

As well as being an active soloist, ensemble and orchestral player, Corinne is passionate about bringing live music to people in care homes and hospices, and initiated the ESO Care Homes and Hospices programme in 2007.

Corinne leads workshops in dementia care homes on performance anxiety and specialises in helping with posture related problems. She loves improvising and regularly performs improvisations in her recitals, during care home visits, weddings and funerals. She also plays with a group of classical musicians called ‘Epiphany’ who specialise in improvisation.

How can Music help those in a dementia care home?

1. Emotions and memories can go hand-in-had

Our appreciation of music is deeply engrained into our cognitive abilities, so much so that it is often one on the last abilities to leave those with dementia. By playing music in a dementia care home it allows us to communicate to the individual behind the illness, even in the later stages.

When listening to music some patients with dementia may feel comfortable to dance, this may lead to comforting physical activities, such as hugging, which family members and friends may not often have the opportunity to do, due to the illness.

Music has the power to stimulate the brain. Not only will it stimulate the musically focused part of the brain, but it also engages many other associated areas of the brain. Because of this many patients feel as if they have more control over their thoughts, feelings and memories.

With or without dementia, music has the ability to reduce stress and improve the mood of people.