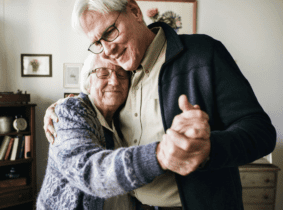 People may often come across common myths about dementia because it is an umbrella term. Dementia is a term that is used to describe a collection of symptoms including memory loss, problems with reasoning, and communication skills.

Alzheimer’s is the most common form of dementia. It is a general term for memory loss and the decline of other cognitive abilities. Alzheimer’s disease accounts for 60-80% of dementia cases. Despite what people may think, Alzheimer’s is not a normal part of ageing.

First, let’s start with the symptoms of dementia:

If you think that these problems are affecting your daily life or the life of someone you know, you should talk to your doctor or seek further advice on specialist dementia care. Despite how prevalent dementia is in the UK, and the continued rise in dementia diagnosis, there are still some common myths that people might not know about.

Myth 1: I’m experiencing memory loss. That means I have dementia.

Many forms of dementia do not have memory loss as their first symptom. This can include experiencing any unexplained changes in mood, behaviour or ability.

Myth 2: Only older people can get Alzheimer’s.

Reality: This is one of the biggest common myths about dementia. Alzheimer’s can strike people in their 50s, 40s, and even 30s. Younger-onset Alzheimer’s is more commonly known as early-onset. Research conducted shows that, in 2019, there were over 850,000 people with dementia in the UK (Alzheimer’s Society, 2019). Within this, an estimated 42,000 people are living with young-onset dementia.

Reality: Violence and aggression are not innate to dementia. If someone living with dementia is acting aggressively, try to understand what may be causing the behaviour. If it is possible, remove or adjust the presence of the problem before taking steps to help.

Reality: A US doctor proposed a theory linking flu shots to an increased risk of Alzheimer’s disease. However, this doctor had his license suspended by the South Carolina Board of Medical Examiners. The theory has also been disproved by much research.

In fact, several mainstream studies link flu shots and other vaccinations to a reduced risk of Alzheimer’s disease and overall better health.

Myth 5: Dementia can be prevented.

Reality: There is no effective treatment that prevents dementia or stops its progression. While there are no treatments that can prevent dementia or reverse its effects, there are certain medications that are effective at managing symptoms.

There are also lifestyle choices that can even slow progression, this can include:

If you are interested in the dementia care we provide at Stanfield Nursing Home, please visit our website today. Alternatively, you can call 01905 420 459 to speak to a member of our helpful and friendly team. You can also check out our social media for daily updates.

If you are seeking more advice on common myths about dementia, you may wish to read our other blog about common dementia myths.